After upgrading to Windows 10 a while back, I noticed that some of the taskbar icons started to look funny and had a white background instead of being transparent like the others. While this UI problem doesn't cause issues with launching or running the program, it is an annoying eyesore.

I decided one day to try and figure out the cause of it and spent several hours trying to hunt and track down the fix, only to be left with countless websites talking about clearing the thumbnail cache etc, none of which worked. Somewhere in the search quest, I ran across a post where it was stated that SageThumbs was the culprit. I use SageThumbs for displaying various image formats as a thumbnail which isn't native to windows. The author of the post said that he simply uninstalled SageThumbs and everything went back to normal. I tried this, restarted and nothing happened. No dice, so I dug deeper. That's when I ran across an issue with the program where the developer said it was a known issue with the .png image format. (All of the icons in Windows 10 are .png files) His suggestion was to "disable .png" in the SageThumbs settings. I headed off and disabled the .png format, restarted and nothing. I tried repairing SageThumbs and nothing. I tried clearing the thumbnail cache and restarting. Nothing. Nothing I tried, would fix the problem with the stupid white background of the taskbar icons. 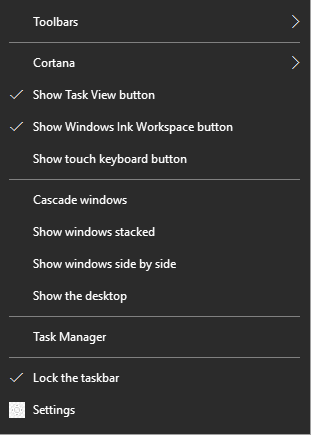 I even noticed that the context menus when you right click were showing up with a white background. Along the way, I found a comment where someone posted that changing "Use Small Icons" in the Settings -> Personalization -> Taskbar would remove the white background. I gave this a try and sure enough, switching to small icons would remove the white background, but I didn't want small icons. I finally gave up and decided: "Whatever, I know what the culprit is, so I'll just live with it because the thumbnail icons are far more valuable to me than a pretty taskbar icon."

A few days later, I forget why, but I ended up doing a search on "sage thumbs messes up windows 10 taskbar icons" which led me to the reddit post Do not install Sagethumb on Windows 10. It practically breaks windows, taskbar icons, apps and all. I looked through the post and while there wasn't a solid fix, I did manage to piece together a few of the fixes suggested and have FINALLY figured out how to fix it once-and-for-all as a solid fix, without having to completely re-install windows. (Yes, that was the solid fix that kept coming up when digging around the internet)

So, the steps to fix the SageThumbs problem are actually quite simple:

This will make all of your icons disappear for a split second and they should all re-appear fixed with no white background!

I was able to replicate the problem and fix it on multiple tries, so I do know it is for sure, related to the .png in SageThumbs and using the Disk Cleanup to clean the thumbnails is the guaranteed fix. Hope it works for you!

As of 2017-05-09, there was an update to SageThumbs to version 2.0.0.23. I installed it and it worked great until the 1703 creator update decided to finally roll out on my computer. It all went back to the white background. Looks like the issue still isn't fixed with the new update :-(

After following your guides

After following your guides it's now all black, which is even worse. I'll try to figure out how to fix it

Sorry to hear the icons all disappeared

Sorry to hear the icons all went black... definitely something going on there... I suppose worse case scenario, try uninstalling sage thumbs and clearing the caches and go from there.

Thank you! Finally an actual

Thank you! Finally an actual fix :) Have been searching & trying for months now.

Thank you so much!!

I had the same problem after installing Sage Thumbs on w10. Your solution worked perfectly! I couldn't possibly have figured it out on my own without your guide! Thank you so much!!!

very very super... its worked for me.... thank you so much

Finally! a real solution to

Finally! a real solution to the problem, thanks man!!

you are the BEST

It takes me so long until I found your solution, i had to disable "use thumbnails in Explorer" too
thanks

After a fairly lengthy amount of troubleshooting, this post was the gem of an answer that I was looking for.
It worked. Thank you!

Thank you!
I had no idea why it was happening, would've never guessed it's SageThumb's fault!
Fixed everything for me! :)