How to fix Google Domains Record Already In Use Error

Update 08-12-2021: Google (finally) did their domains.google makeover sometime in 2021 and I honestly haven't had a chance to dive into this problem to see if it still exists. This page may be officially outdated.

If you've jumped ship from the slow (GoDaddy) and archaic (register.com) registrars and switched over to the super duper Google Domains, chances are you've just run into the problem Record Already In Use while trying to add an A Record, maybe a CNAME or even a TXT record. Heck, it could be any of the records that can cause the error: "Record Already In Use".

I ran into this tonight and was surprised there aren't more sites talking about the error. I guess I'm one of the people who just did it wrong and everyone else knows what they're doing...

Amusingly, there's a community question out on the Microsoft answer pages of someone asking about this very problem. Politely, the Microsoft rep asked if they were wanting to host their domain on Office 365. Needless to say, "Julie's" question never got answered.

I ended up realizing the fix to the error after a few minutes of Googling and not coming up with anything and the brainfart that I didn't remember running into this before. I have because the fix was so obvious when I finally figured it out.

Enough already, On to the Fix!

There's actually two different times I know of where you might get this error and the "fix" is in two different places. (Shame on Google Domains for not having a more thought out UX error message)

The First Place To Look

Point is, if you're adding any Google related records or sub-domains that "could" be used for a Google app (Mail, Calendar, Docs, Drive etc) then this is the first place to look.

The Less Obvious Place To Look

If you've checked the obvious place of the Synthetic Records and still getting the error, then there's a very obvious reason you're getting the error. It's because the "Record already in use".

BUT WHAT DOES THAT MEAN?!??

Well, I can tell you right now, you're trying to add it to the top, blank field area like the image below. 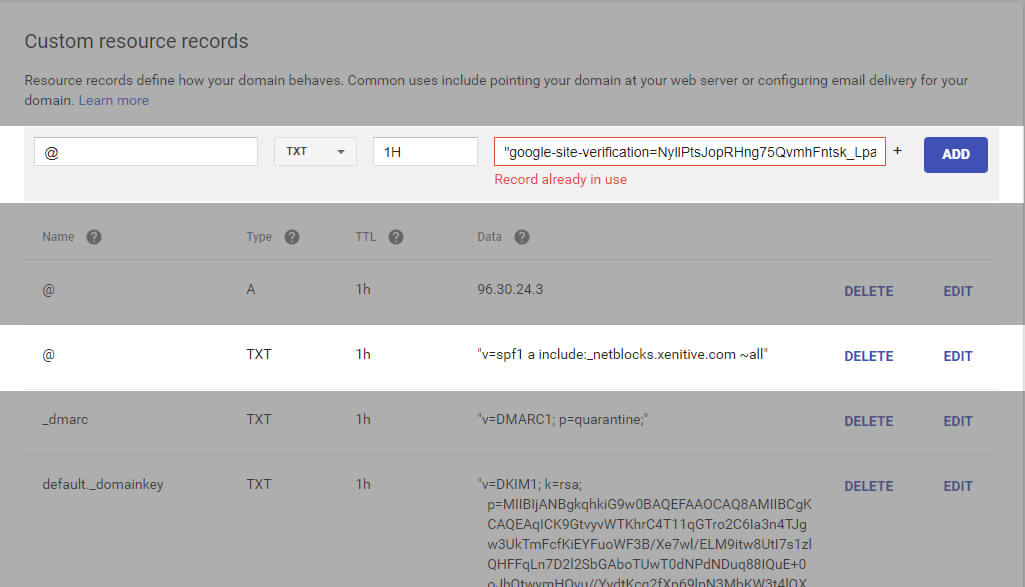 See, all of the records are grouped by the @ / subdomain. If you're trying to add a new @ TXT record and you already have another @ TXT record, you're adding it in the wrong place if you try to use the top input field area. In all honestly, this is a horrible UX choice on the Google Domain teams part. They should have it automatically merge in a new record with what is already there instead of making you hit Edit -> + THEN add the new record...

I say all of that and while the UX may seem like a bad design up-front, it really isn't all that bad "once you get used to it". The problem is that 99% of all other registrars use a single line to add a new record just like Google Domains. The difference is that when you add the line on other registrars, the line is added as a completely new line so it doesn't care if the Name is already used. Google Domains on the other hand, only reserves this blank input form for brand new DNS records that haven't been associated because all similar types and names are grouped together. Since almost all of the registrars use a blank input for adding all records, people come over to Google Domains and expect it to work the same way, then can't figure out why they're getting Record already in use errors for simple DNS additions. If you're adding different CNAMES with the main input form, you shouldn't ever see the error unless it does actually exist. On Google Domains for MX records, TXT records SRV records etc where there can be multiple records for the same type and name however, you can only use the input form on the very first creation of the record type to get it going.

The way Google does it is super easy and doesn't take that long when you get used to it, but if you're new to Google Domains or coming back after some time away, that wonderful ol' error Record already in use can be a pain to troubleshoot because it doesn't follow the same UX pattern of any other registrars.

Check out the pics below for some guides and I'm sure you'll get it figured out!

Agreed the UX on that error message is not specific/helpful

nicely done. I've used google domains for years, that's a new one. You're right, overall it's not bad, but sheesh that's an oddball. Likewise Scott K -- I too had two TXTs, never occurred to me, etc..

wow, sometimes you just need someone to break it down real simple. Thanks a lot!

This solved my problem completely - who would of thought of a UI where 2 TXT records are OK, but 3 are not? Append solved the issue - thanks for posting this!

Saved me a lot of trouble! Thank!

Like you said, interesting not many articles on this issues!! But thank you for taking the initiative. The second option did the trick and yes thats a bad UX from Google Sites.. But I suppose they trying to make it simpler and minimal.

Thank you for this information. but I'm still getting that same error "Record in use". I went back to the Custom resource records in Google Domains, added another box and entered the MX record. I'm wondering if its because I deleted the MX in the first box that I originally put the code in. This whole ordeal has been a nightmare. You can't get help from Google Domains Nor Gsuite. Because my domain was purchased through GD Gsuite keeps refering me back to them as being a third party. Article after article that I am reading is becoming a blurr. Similariy the verify your domain email was sent to my default personal gmail account and wasn't use how to change it to the new domain email accout just created. Yet in the admin section of my new gsuite account the quixkstart guide said my settings are complete. but I am not able to receive emails. I can send them but not receive them. This is crazy.

Thank you, this was super

Thank you, this was super helpful.

This was so helpful. Thank you

This worked perfectly. Thank you for taking the time to write the fix!!

I'm a film editor, mixer, and special fx person who knows very little about what goes on behind web sites user facing pages.

You just saved me from throwing up my hands and running away from my much needed update on my portfolio.
Thank you.

Thanks al lot! took 2 hours to get to this.

Thanks for your easy tips to solve this bad google design

Super helpful with my SPF already in use error

You rock !! And good write up, too. So many of life's problems come from a poor product/user experience design.

not kidding - you're addressing my problem for REAL!

you saw my microsoft comment from almost two years ago ... and here's me, running back into the same issue. And finding your article!!! :) And for the very first time, I finally get it, and now I can rule the world!! Or at least fix these ridiculous DNS issues. Your explanation was super helpful, and I'll be laughing for a week at how it took two years to solve this problem. Thanks!!

Julie! Haha! that's awesome! Well, you were my inspiration to help make other aware of "how to fix the problem" after I ran into this issue TWICE and spent who knows how long each time trying to figure it out.

Rumor mill has it that the Google Domains folks are working on a re-design, so it might get resolved at some point down the road. An official bug was put into the issue queue at Google so at least they are aware of it and will hopefully take note for the future design.

Super easy to deal with when you "know how it works", huh?? Glad to have helped :-)

Thanks (No thanks Google)

Thanks for this, it is a bad design. Good work. Sort it out Google

And I guarantee instead of listening to all the feedback on this they just say that we are all wrong and they are right. They don't answer to anyone there.

I have been trying to do "this" for about an hour. Clearly, "Julie's" problem was my problem, but, as you know, there was NO ANSWER! I took a break and cleaned the kitchen. I came back, refreshed, and tried a new Google search for the answer. And I found your wonderful, perfect fix! I NEVER would have figured that out, and I suspect neither Google nor Microsoft would have either. THANK YOU!

Hey, glad I was able to help you get it figured out. I went back through and did some SEO updates to the content so hopefully the article will get some better ranking so it's easier for folks to find in the future. There has been an official bug reported to the Google Domains team regarding the poor error description so hopefully we'll see some improvement in that area in the future.