Around March 17th of 2021, the CutStudio plugin stopped working for everybody in Illustrator CS6.

I remembered running into a similar situation a few years ago and found that dealt with the timestamp of the plugin. In that situation, the CutStudio plugin was outdated and upgrading to the latest version 2.02 solved the problem. Fast forward to March 17th and the problem started back up with the last CutStudio version available for Illustrator CS6.

For my particular client and I'm sure in your situation too, you've paid for Illustrator CS6, you're using it to cut to one or a handful of plotters and you don't want to spend money every year on the stupid expensive fancy latest-and-greatest Adobe suite because what you have works "just fine". It's totally relatable and nobody can blame you, especially when Roland tends to be on the slow side of getting their plugins up-dated with the latest versions of the Adobe software and you run into problems with it every few years... We all just want something that works. And when it breaks for some other reason, we'll update it then, Am I right?

Alright, let's dig into the simple instructions on getting you back up and running with CutStudio and Illustrator CS6.

What I found when digging into the CutStudio plugin package was that it was officially set to expire as of March 16th, 2021. Adobe requires anyone who makes plugin packages to create a certificate which helps protect the package from being tampered with. Certificates require a signing date and this date just-so-happened to be March 16th, 2021 for the CutStudio plugin.

For anyone wishing to dig into the certificate itself, I've extracted it for you.


Decoding the certificate at https://www.sslshopper.com/certificate-decoder.html gives:

I would love to say that Roland will update the plugin with a new certificate, but don't hold your breath. I will be very surprised if Roland releases a new plugin for Illustrator CS6 to add a new certificate. Don't worry though because I found a pretty solid workaround that seems to not only do the trick, but should help future proof the plugin.

If the plugin is still installed in the Adobe Extension Manager, then proceed to the Illustrator Workaround

1) Download the latest CutStudio plugin extension for Illustrator CS6 (latest version as of this blog post is 2.02)

In order to use the plugin with Illustrator, the workaround is to trick Adobe into always thinking it is running BEFORE March 17, 2021. 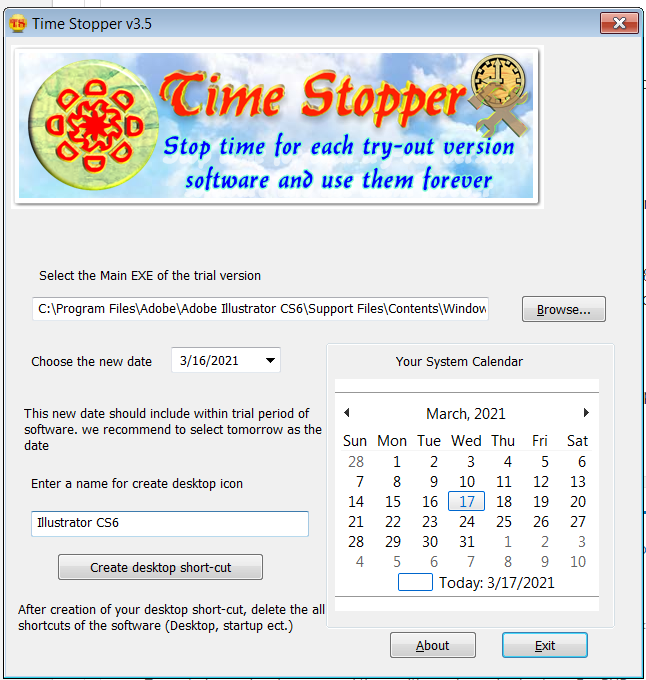 a) Set the path to illustrator.exe as: C:\Program Files\Adobe\Adobe Illustrator CS6\Support Files\Contents\Windows (unless it's different on your computer)
b) Set a date to March 16th 2021 or earlier
c) In the shortcut box, type Illustrator CS6 and click the Create desktop short-cut button

All done! The plugin should work just fine now because Illustrator thinks it is running on a date that is before the CutStudio Plugin expires.

This won't affect the timestamp on files when you save them either. (I checked) Save files will continue to use the most current date.

Hi and thanks for the great explanation of this issue. I downloaded TimeStopper and followed the directions but it still didn't solve our problem. As a workaround, I set the system date back, cut what I needed, and then returned the system date back to present.

Just wondering if you had any ideas about why the TimeStopper solution may not have worked, and if you see any problems with resetting the actual system date when we need to cut.

Again, thanks so much for providing some much-needed insights into this issue. Hopefully, Roland will provide an update soon.

Make sure you use the shortcut on the desktop that was created from TimeStopper to launch the program. My client called and said it wasn't working either and asked if he used the desktop shortcut. His response was: "No".

If the desktop shortcut isn't working, maybe you're using the original shortcut? You might blow away all of the shortcuts to Illustrator and have TimeStopper re-create the icon for you. Hope that helps!

Amazing, thank you so much!

Amazing, thank you so much!